Russian Museum presented to the audience a retrospective exhibition of works by one of the most famous Russian artists of the early XX century — Konstantin Somov. Dedicated to the 150th anniversary of the artist’s birth, the exhibition was positioned as a long-awaited and significant event. This happened because the name of Somov, who was an emigrant, was long forgotten among all the museums of the USSR. The first and last solo exhibition of the artist Somov’s works was held in the halls of the Russian Museum in 1971. Since then, complaints about the artist’s forgetfulness and underestimation at home have not stopped for a long time.

Just two years ago in St. Petersburg, for the first time in the last half century, Somov’s retrospective was shown at the KGallery art gallery. This exhibition really rediscovered many of the artist’s works. The gallery selected the best works of Somov from the collections of the Russian Museum, and also painstakingly collected works of the artist from private collections in Moscow, St. Petersburg and Europe, some of which were first shown in Russia. Chamber by its decision, but not by its significance, the exhibition was also accompanied by a printed edition that included not only the exhibition catalogue under the scientific editorship of Elena Yakovleva, the doctor of art history, but also articles by leading art historians about Somov’s artwork. The attributions of the artist’s works were clarified and even made for the first time, and the history of their creation was revealed in detail.

Of course, the St. Petersburg audience still remembers this exhibition at KGallery, but the curators of the Russian Museum foresaw this. Probably, trying to avoid repetitions, they did not present any works from St. Petersburg private collections, but, in addition to the already familiar works from the collections of the Museum itself, you can see Somov’s paintings and aquarelles from private collections in Moscow, the State Tretyakov Gallery (almost all of them were shown last winter at the exhibition ’Harlequins of the Silver Age: Somov, Sapunov, Sudeikin’) and the Pushkin State Museum of Fine Arts. For the first time, the audience was presented Somov’s painting ’On the beach’ in 1932, as well as a sketch portrait of A. Levchenko in the image of the lady in the de Laclo novel ’The Dangerous Connections’ in 1934 and other works from the Moscow private collections.

The real treasure of the exhibition were the materials from the collections of manuscripts and photographs — touching letters of the artist, archival materials, photos of different years, previously unknown to public, copies of catalogues of lifetime exhibitions of Somov’s works.

The organizers presented more than a hundred works of the artist in the exhibition halls of the first floor of the Mikhailovsky Сastle, although one of the most important masters of the ’World of Art’ deserves to be presented in the Benois building. The exhibition is organised mainly in chronological order, but it would be interesting to trace the growth of Somov’s subjects in his works. Surprisingly, he could finish one composition for many years, and by changing only the nuances, the artist was able to revise the entire plot of the work! A striking example are two versions of the watercolor ’Harlequin In Love’, made with a difference of a year. The first of them, earlier — 1914, now known as ’Masquerade’, is stored in the Pushkin State Museum of Fine Arts and also presented at the exhibition. This watercolour, made by the artist especially for the collector and regular buyer of Somov’s art, E. V. Burtsev, can be attributed to the artist’s openly erotic, pornographically passionate works: harlequin fervently clings to the naked shoulder of a Lady who has lifted her skirt; standing behind, he tightly squeezes her chest with his hands. Directly above the couple stands a statue of Flora, coquettishly arching her bare thighs. Lovers hide behind it from the noisy crowd of the carnival, they are alone in this part of the park and their privacy is not accidental.

A year later, Somov returns to this plot and creates a new version of ’Harlequin in love (Harlequin and Shepherdness in the park by the moon at the statue of Flora)’, which is now stored in the private St. Petersburg collection of Kirill and Yulia Naumov and, alas, is not presented at the exhibition. At first glance, the works seem to be identical — the composition is completely preserved by the artist, but the plot is completely different. By changing the details, Somov creates a picture full of poetic tenderness and carefree fun: the statue of Flora is now turned to face the viewer and is dressed in a tunic; a Lady in a dress that hides her high breast laughs and wants to take the hand of a Harlequin who is gently embracing her; masks look at the lovers through the leaves of the park, the air seems to be filled with the noisy fun of a carnival.

In these details — story, composition, colour — presents the genius of Somov. He works with the nuances of color, drawing, and plot in an impossibly precise, concise, and masterful way. The artist creates and develops a poetic and imaginative series of his works with ease and effortless genius.

From this point of view, it would be interesting to compare the artist’s sleeping ladies — ’On The Couch’ and ’Sleeping Young Woman’ both made in 1909, now stored in the Tretyakov Gallery, ’Sleeping lady’ made in 1920 from a private collection, ’Sleeping young woman’ made in1922 from the museum of I. Brodsky; Somov’s lovers under the birches — ’Pastoral’ made in 1920 from a private collection in Moscow, ’Painful confession’ made in 1928 from the collection of K. and Y. Naumovs, ’Lovers’ made int 1920 from the Saratov Art Museum named after A. Radishchev; the cycles of ’rainbows’, ’bonfires’, ’fireworks’, ’harlequins’ and ’kisses’… It is these cycles that define Somov’s approach to work, distinguish him from all other artists in genre, demonstrate changes in his technique, and connect different stages of the master’s work compositionally. All of them show how that the artist returned to the same story for decades with different tasks and for different reasons.

An interesting topic is the development of the portrait genre in Somov’s artwork. The exhibition presents both early portraits of relatives and friends from the collection of the Russian Museum (portrait of the artist’s father Andrey Somov in 1897, portrait of Anna Benois in 1896, portrait of Anna Ostroumova in 1901, etc.), made by Somov, which may called ’and art for yourself’, and the more mature, written already to order, art. The artist did not like these ordered portraits, often openly scolded models, not hesitating in expressions on the pages of his diaries, and considered himself as a mediocre artist, sincerely suffering from the need to write ’digutant frogs’ just for the sake of money. But meanwhile, it was Somov who became one of the best portraitists of the era. The most influential people of their time dreamed of having a portrait made by Somov, and they were ready to pay for it without stint. Following the popularity of portraits of Valentin Serov, the fashion for portraits of Somov also came. And it was he who set the tone, created the best and most characteristic examples of portrait salon painting of the early XX century. An example of such a painting was the portrait of Elena Oliv, the daughter of a large sugar grower and collector Pavel Kharitonenko, which is also presented at the exhibition. In the pose of the model, in the expressive position of her hands, the artist departs from the academic canons and finds a very attractive move for the viewer. In 1924, a portrait from the collection of V. Kharitonenko, the mother of the depicted, entered permanent storage in the collection of the Tretyakov Gallery. 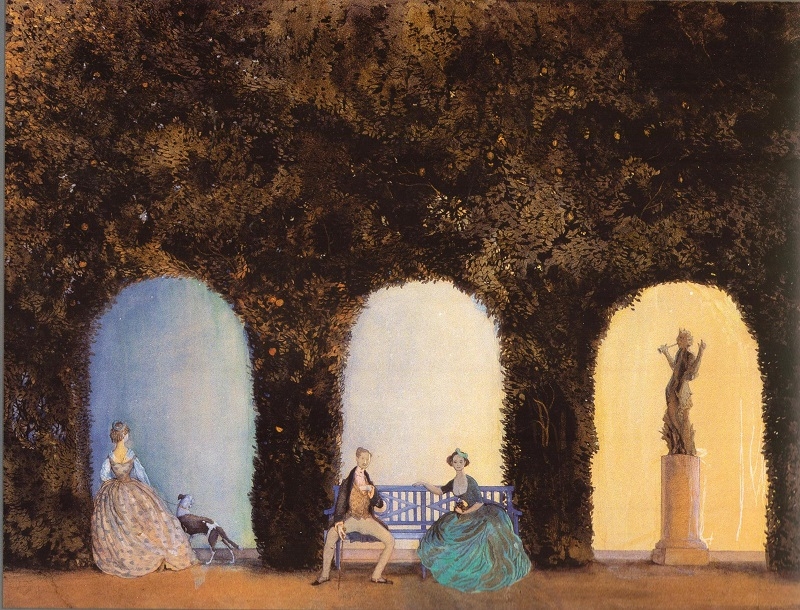 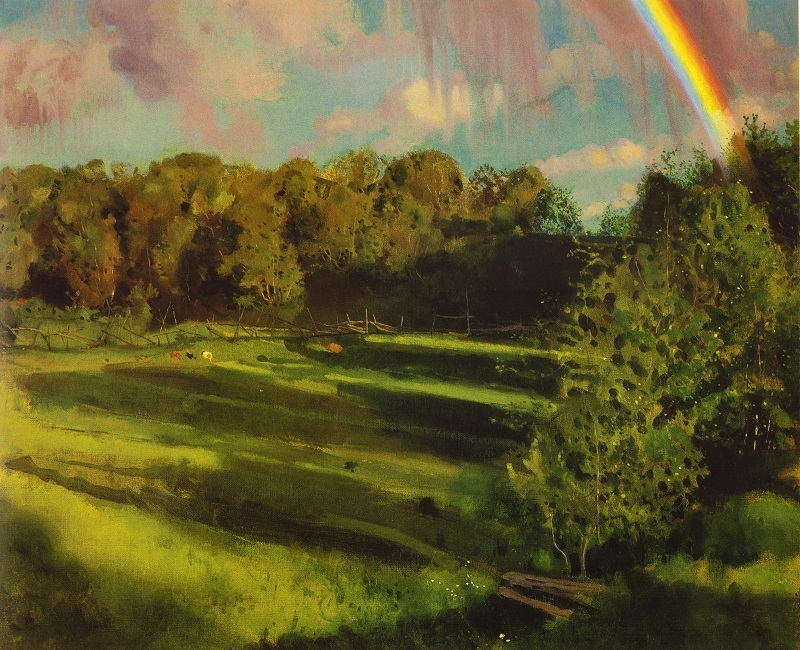 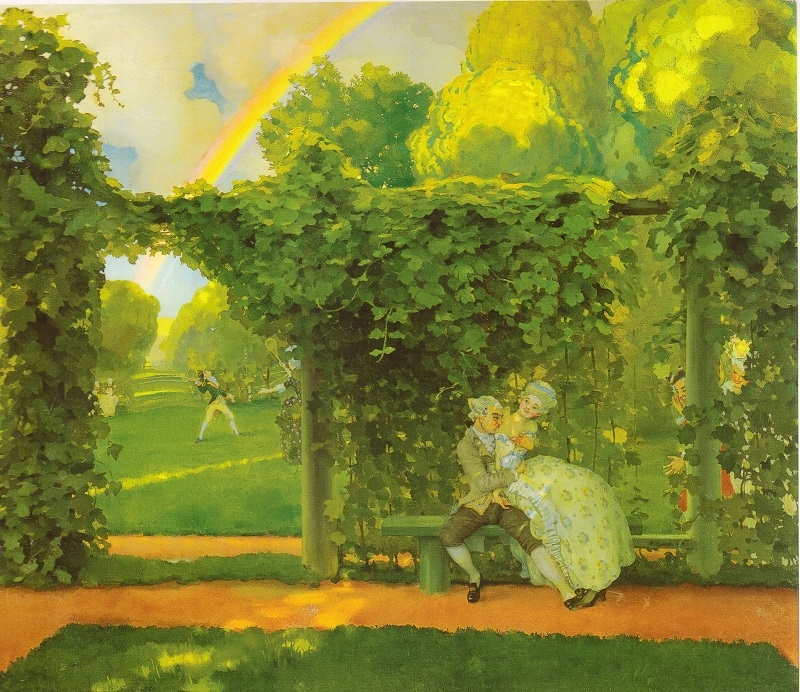 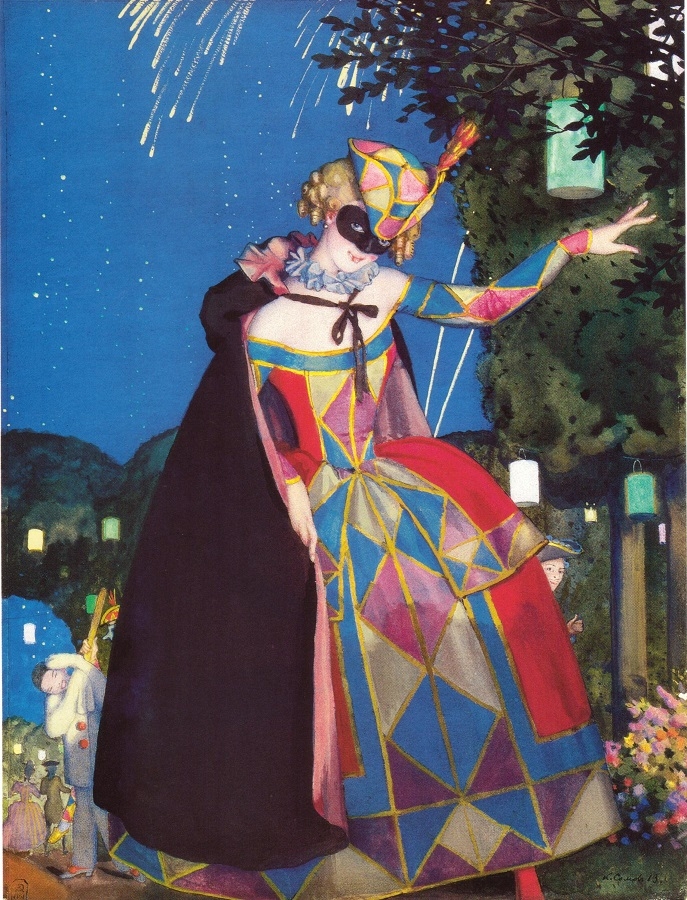 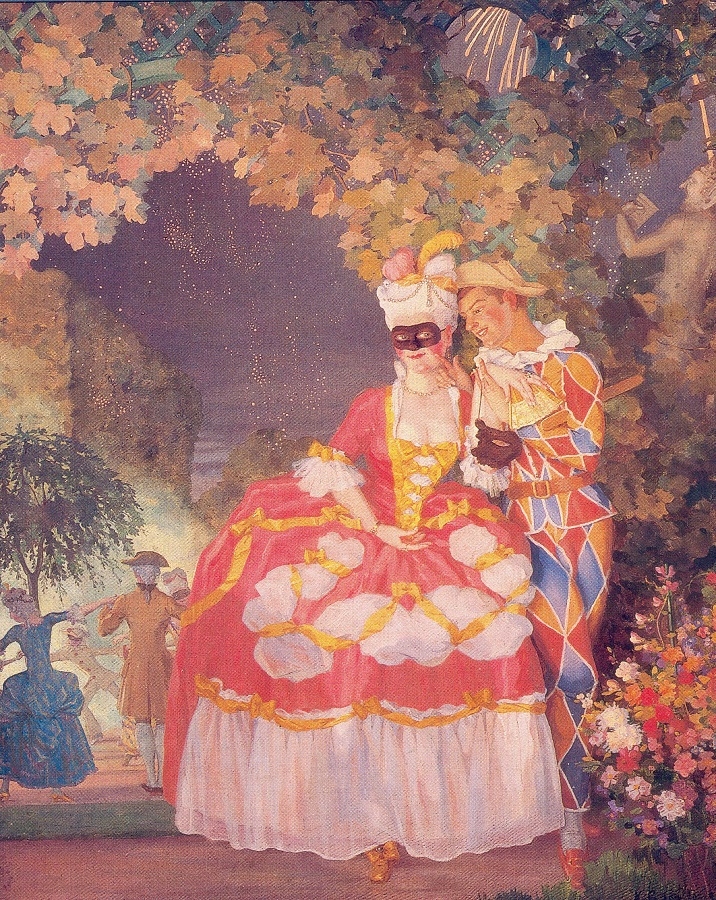 An important addition to these first-class works of Somov in the Russian Museum could be such detailed information about the works presented, now the exhibition lacks accompanying material-quotes, memoirs, biographical information. Only rainbows, marquises, kisses…